Yiwu, a manufacturing hub in eastern China, is known for producing Christmas decorations.

Hong Kong (CNN Business)For months, factories in the city of Yiwu, known as China’s “Christmas town,” have been cranking out most of the tinsel, decorations and other festive ornaments now hanging on trees worldwide.But production almost stopped in mid-December, as local authorities switched off the lights.Ma Hairu, who works for a manufacturer making paper decorations for Christmas and New Year, said his factory was struggling to meet demand because they’re only allowed to work half days. “We have a lot of orders, but we don’t have enough time to make them,” he said.

We have a lot of orders, but we don’t have enough time to make them.”

Officials in China’s Zhejiang province are racing to meet five-year energy consumption targets set by the central government that are due to expire on December 31. Earlier this month, a local directive instructed businesses to stop elevators below the third floor, and to only use heating when temperatures outside fell below 3 degrees Celsius (37 degrees Fahrenheit).”There is no shortage of electricity supply [in Zhejiang]. Some places in the province adopted measures themselves to restrict electricity use to save energy and reduce emissions,” Zhao Chenxin, secretary general of the National Development and Reform Commission (NDRC), said Monday.The drive to cut energy consumption has disrupted millions of lives. In Yiwu, a city of a million people, heating was turned off in offices, shopping malls, schools and hospitals, despite daytime temperatures of about 10 degrees Celsius (50 degrees Fahrenheit).Even street lights went out, leaving drivers and pedestrians fumbling in the dark, according to local residents and government notices. Heating has also been restricted in the nearby city of Wenzhou, home to more than 9 million people, according to the local government.

Zhejiang’s abrupt cut in electricity consumption highlights both the strength and pitfalls of China’s political system. While the Communist Party can make ambitious promises to cut carbon emissions, the forceful implementation of targets can come at a cost to the people they are ultimately meant to benefit.

The power restriction in Yiwu first gained attention last week, when photos and videos of pitch dark streets began circulating on Chinese social media.On Weibo, China’s Twitter-like platform, Yiwu residents complained about street lamps being turned off and having to drive home in the dark amid traffic chaos. The topic quickly gained traction, drawing 120 million views as of Wednesday, and thousands of comments. 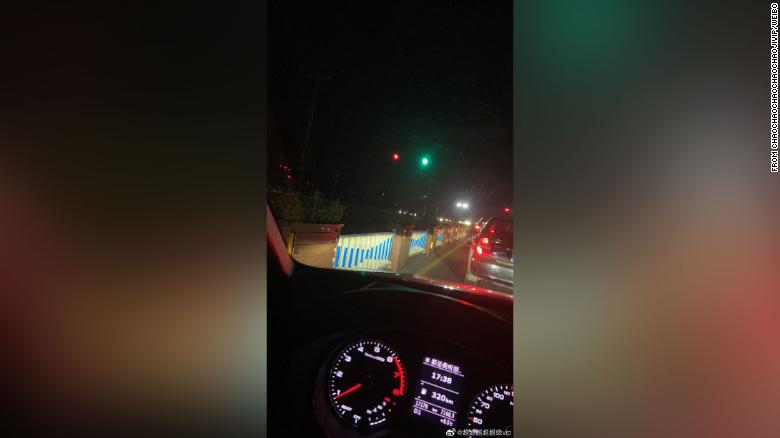 Yiwu residents drive in the dark as street lights are turned off to save energy.Some accused the Yiwu government of sacrificing public safety to tick a box on a political report card.Following the online backlash, officials turned some lights back on. “The lights were only off for a few days. Most of them have been turned on now,” a government hotline operator told CNN on Wednesday.But other restrictions remain in place. Yin Mingfei, a manager of a cafe in a shopping center in the city’s central business district, said the heating had been switched off for nearly two weeks, and electronic advertising billboards and escalators weren’t working.A receptionist at the Yiwu Central Hospital said heating in the common areas had been turned off, and that she had to put on extra layers of clothing to stay warm. On Weibo, office workers complained about shivering at their desks.The city’s factories and workshops, whose businesses have already suffered from the coronavirus pandemic earlier this year, were ordered to reduce or halt production at a time when orders are flooding in. 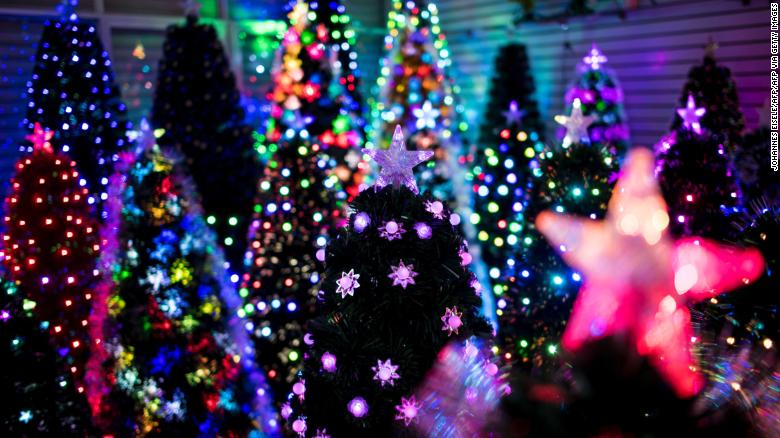 Yiwu has earned a reputation as Santa’s “real” workshop for producing much of the world’s Christmas decorations.December would have been the busiest time of the year for Liu Lei, who runs a small workshop with his wife in a Yiwu suburb making red envelopes for the Lunar New Year. But he has been ordered to work two days on, two days off until the end of the yearto save power.”Of course the impact [on my business] is huge. The orders are rushing in for red envelopes, but there’s no way I can make enough,” Liu said. “So I had to turn some down.”

Similar scrambles have happened in the past — on a much larger scale and for many more months. In 2010, the final year of China’s 11th five-year plan, Zhejiang and more than half a dozen other provinces rolled out measures to restrict electricity use.Some started as early as July that year, limiting or halting production at energy-intensive factories and banning air conditioning in offices and schools, according to media reports at the time.Since coming to power, Chinese President Xi Jinping has waged a “war on pollution,” doubling down on efforts to steer the country away from its reliance on coal, which as of 2019 still accounted for nearly 60% of China’s energy consumption. More recently, the president made the ambitious pledge for China to become carbon neutral by 2060. 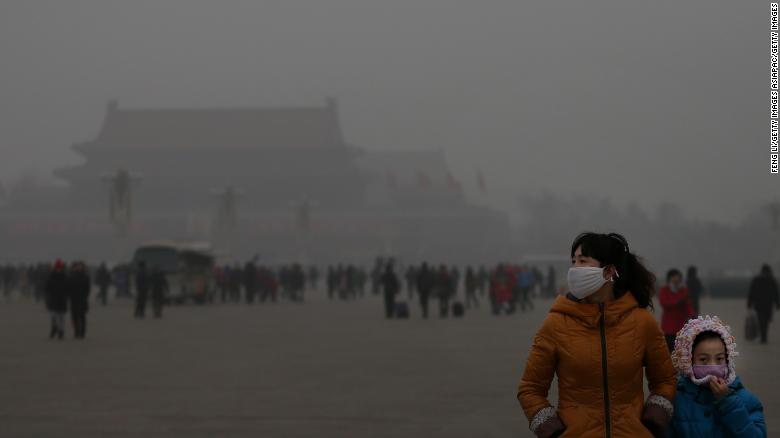 Beijing, China’s capital, is often shrouded in heavy smog in the winter.But such well-meaning efforts have sometimes inflicted suffering due to bad planning and aggressive rollouts. In 2017, a massive retrofitting campaign to switch northern China’s winter heating from coal to cleaner-burning natural gas left some residents and villagers shivering in freezing temperatures, as local officials banned coal before gas furnaces were properly installed or gas supply was stabilized.”This is common in China. It’s a result of the target-oriented political culture,” said Trey Mc Arver, partner at Beijing-based consultancy Trivium.Without democratic elections, most Chinese officials climb the political career ladder in a performance-based evaluation system, where targets on economic growth, social stability and, increasingly, environmental protection, play an important role in their chances of promotion.Under Xi’s authoritarian rule, local officials are placed under even more pressure — filtered down from the central government — to meet Beijing’s policy targets, such as those set out in the country’s five-year plans. 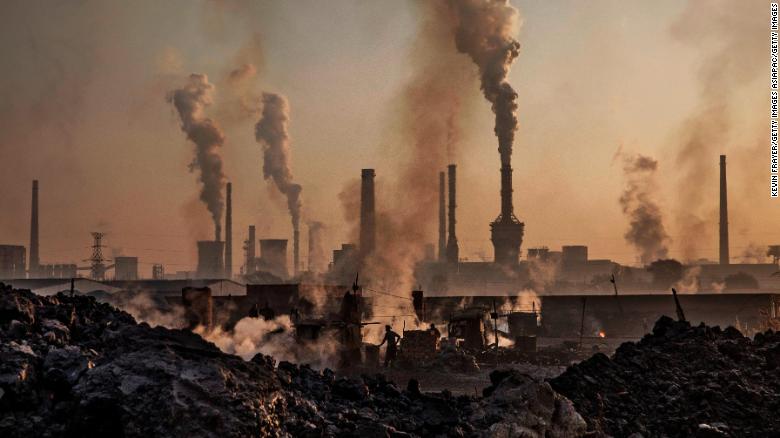 Smoke billows from a large steel plant in Inner Mongolia, China.In September, officials in Inner Mongolia were summoned by the NDRC to discuss the “serious problems” facing its energy saving situation, after its energy consumption and intensity exceeded the limits set in the 13th five-year plan.Five-year plans are a legacy of China’s command economy during the Mao era. These top-level policy blueprints lay out the country’s social and economic development goals for the coming period. The 13th five-year plan covers 2016 to 2020.

Zhejiang is required to cut energy intensity — the amount of energy required to produce per unit of economic output — by 17%compared to 2015 levels, according to a blueprint of the 13th five-year plan on energy saving released by China’s State Council.The province is only allowed to consume an equivalent of 23.8 million tonnes of coal above 2015 levels by 2020, however there are indications it was using too much.According to a notice released by the Zhejiang Provincial Development and Reform Commission in 2019, Zhejiang consumed 87% of its extra energy quota during the first three years of the plan.In October, the central government dispatched a team of investigators to Zhejiang to evaluate its usage. The team instructed Zhejiang to “do its best” to meet its targets, according to the Zhejiang Provincial Development and Reform Commission.The problem with targets is there are often more than one for officials to meet and they are not always complementary, said Mc Arver, the consultant. “The reason that there’s a scramble to meet these targets here at the end is because local officials have been focused primarily on other targets as of now,” he said, such as GDP growth, employment and government revenues. 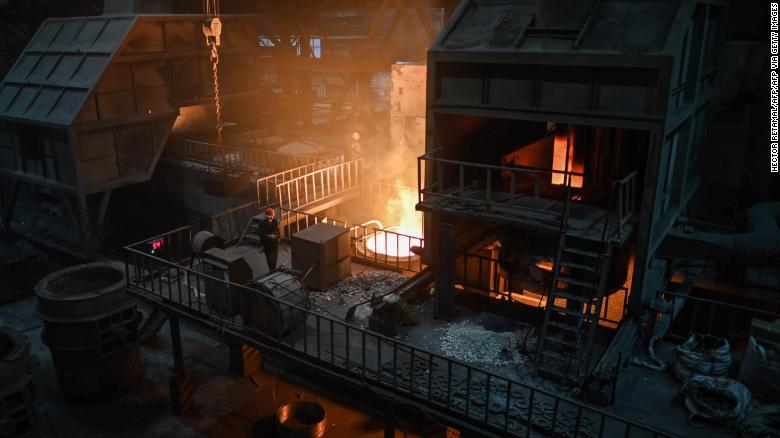 China’s steel production has surged after the coronavirus lockdown.Shutdowns due to the coronavirus initially helped emissions targets, analysts said, but the rush to revive the economy have set it back. China’s rapid economic recovery from the pandemic has relied heavily on energy-intensive heavy industries, said Li Shuo, a senior climate policy adviser for Greenpeace East Asia.A surge in steel production contributed to a rebound in China’s carbon emissions following a drop during the coronavirus lockdown, Lauri Myllyvirta, analyst at the Centre for Research on Energy and Clean Air, wrote in an analysis.For the manufacturers in Yiwu, there was also a rebound in production following a surge in orders after the summer. But that proved short lived.Ma, who makes and sells festive decorations, said it had been a particularly tough year for business, first because of the pandemic and now the electricity restrictions.”We used to make revenue of more than one million yuan ($150,000), but with all the disruptions this year, we really don’t know how much we can make,” he said.

Jolie was filmed on a date with her ex-husband: A singer in the past?

iPhone 13 – everything in order

United Airlines CEO: Insisting on vaccines “right thing to do”

Covid: Most popular Facebook link in US spread vaccine doubt

Can the US crack down on fake vaccination cards?